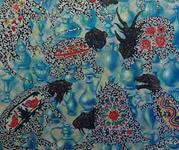 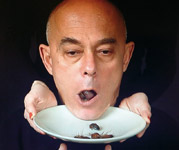 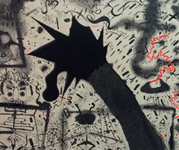 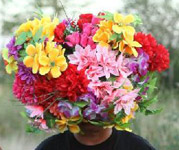 The beginning of János Szirtess artistic career can be traced back to the avant-garde movement of the second half of the 70s with the creative workshops and the creative research of INDIGO group led by Miklós Erdély as well as the performances of Tibor Hajas that opened a whole new trait in the history of performances.

Another key aspect is the new aspirations in the paintings of the 80s, in particular, the trend of working with archaic motifs and decorative forms. The works of Szirtes, from this era, are characterized by elements of folk art, and primitive ornamentation of natural peoples.

The middle of the decade is mainly characterized by the intensification of philosophical content, as well as the appearance of visual display of existential issues. In these works of János Szirtes rituals of ancient cultures are becoming extensively important, with outstanding examples of black smut images crafted in the 90s.

The studying of the structure of space and correlation of organic-inorganic worlds is another main trait in the oeuvre of János Szirtes that resurfaces in his works from time to time. The compositions are created with several layers, where the violence and momentum of gestures are composed into free structures. The surfaces, sometimes finely dissolve, sometimes it splashes are often is broken and overwritten by graphic details, that is no surprise, as Szirtes graduated as a Graphics major at the Academy of Fine Arts.

The research of the nature of sensuality, compression of the action of performances in 2D, aesthetic self-representations can all be read from his artistic works. The latest examples of these researches on the body are the photo series, created in recent years, where the artworks are carried on by the body itself, capturing the process of action. The emphatic inclusion of bodies and self-reflection re-connects the world of images with that of performances, indicating the integrity of various genres composed together throughout the oeuvre.