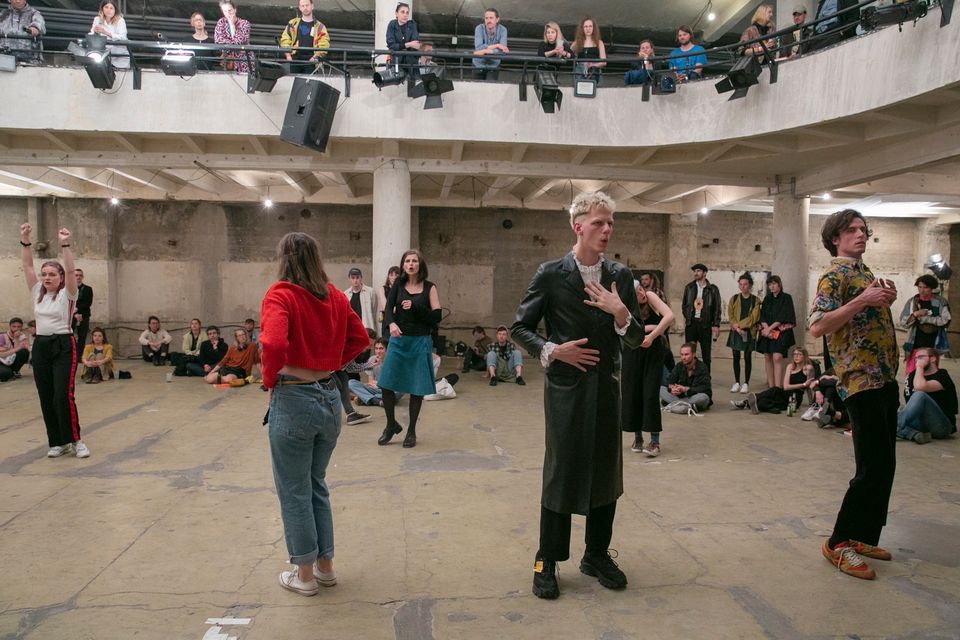 The performative situation Close Encounters by Maja Štefančíková works with the economy of attention, which serves as a special marketplace that prospers thanks to the indirect transactions between the performer and the audience. The high number of stimuli reduces our ability to draw attention to something. However, due to the implied managerial approach, the audience tends to perceive the performative situation as a rare “commodity” that needs to be acquired, as a two-person meeting – built on eye contact – that brings forth unexpected emotions. In this spirit, movement and singing are presented as communication between dancing people, audiences, and space. Common movements and the individual movement modes of the dancing people accompany singing or speech in the process of transformation into various new patterns of meaning. The dancing people represent movement in time, in a specific situation, in a certain physical condition and constitution. At the same time, they look for moments of common emotions that are evoked by mutual encounters in a certain environment. Both sides then observe their own perceptions, the common space, its energy, and their changed relationships. They create a performative situation that tests their mutual attention in the new conditions of reality.

Maja Štefančíková is a visual artist. From 2016 to 2018, she worked as an assistant lecturer in the Studio of Image/Sound/Text and Context at the Academy of Fine Arts and Design in Bratislava, where she had previously studied in the glass, sculpture, and video studios. In 2012 she started working as editor of the Slovak branch of the online art magazine Artalk.cz. The curatorial collective Café Utópia characterizes her works as performative situations dealing with social phenomena, such as work, institutions, and the art world. She examines aesthetic experience, perception, and memory with a particular interest in testing the audience’s awareness by using inconspicuous, often invisible, empty, silent, or otherwise subversive input in an attempt to activate hidden levels of perception. She lives and works in Bratislava.