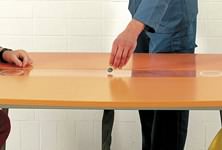 An exhibition attempting to survey the invisible future, Smart Country has been created from a fusion of art, science and technology. The Stockholm SMART STUDIO / Interactive Institute focuses its activities on the experimental domains of design, architecture and new technology. The artists, designers, architects and engineers at the Studio work towards presenting those new achievements of science and technology that will most probably alter our broader and closer environment, as well as our personal relationships, making them more tangible through art.

The six installations on view challenge our pre-conceived notions of time and space, thought and matter, flux and immobility. Brainball places the interaction between man and machine in a new perspective. Two players control the little ball on the table through their brainwaves oscillating between the states of calmness and stress. The aim of the game is to be calmer than your opponent, since those with brainwaves marking a more relaxed state will win, as these brain waves will make the ball roll towards the opponents goal. Instead of activity, the key to victory is calmness; instead of rational thinking, your emotional state controls the machine.

RemoteHome reflects on aspects of communication technology that may influence our personal relationships. The installation is comprised of two apartments located at a distance from one another. The sofas in them are connected via the internet. The sofa sags if the friend living in the other apartment sits on it, thus the two persons presence and activities become perceivable almost immediately, in real time. The light pods kinetically react to the movements of the distant friend.

Monochromeye is a device of vision placed on your finger. As you point at an object with the finger-holder on your finger, the device transmits the blurred contours of the object, with visual information reduced to the colours red, blue and green. The sight, which is thus reduced to its basic elements, forces the viewer to put aside all familiar guidelines of perception, to orient her/himself and move about in the space according to new forms of perceptual information and interpretation.