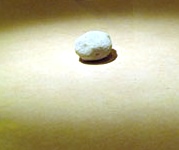 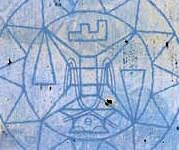 If it were possible to sketch the careers of artists on a graph, comparisons of the careers of Mariann Imre and Tamás Kótai, despite their sharply differing approaches to form and their independent depiction of a seemingly permanent assortment of symbols, could nonetheless be characterised by repeatedly intersecting lines. Imaginary points of intersection could be located around such broad concepts as time, recollections or the symbol itself.

In addition to her diary drawings, some of Mariann Imres works focus on human gestures that have become a habitual daily ritual and that constitute a unique personal sign: grandmothers ceremoniously practised and perfected signature, repeated a hundred times a day, which reminds us of the sentence from Tolstoys diary, "As if I were still alive"; or the serial bite imprints on apples, each unique and never to be repeated, made by a small child who has just started his life.

By elevating the signs that she has found and selected into works of art, the artist has not only deprived these signs of their original material, but made them independent of time. For a moment, not only the elucidated bonds of the artists own life appear in the delicately interwoven material, but also life itself, surviving without any specific events, and eternalised into rites. While in Mariann Imres earlier works the intentionally expressed juxtaposition of materials also played an important role, today the materiality of the linking illustration elements - such as concrete, twisted thread and even the inter-looping letters - has shifted to the background, and the non-material signs of recollection have been transformed into an organic fabric.

The symbolised world of floating forms created by Tamás Kótai is also rooted in the ceremonial gesture of man wishing to leave behind a sign. However, the personal characteristic, which is so directly reflected in Mariann Imres works, is here hidden behind the internal laws of a consistently constructed system of signs, in a detached way. In a manner characteristic of recollection, the signs, based on shared visual experiences and geometric-spectacle fragments and composed of imaginary components, gain a meaning that depends on the viewers particular mindset. Out of the sign collections that appear on the surface, Tamás Kótai creates chronological patterns contrasted with the background or most recently, juxtaposed against colourful components.

In the artists approach, the created concatenation of signs is a type of structure of recollection, which can be continually entered and left, and in which possibilities of recognition or induced recognition are hidden. However, the correspondence between material form and recollections is never unequivocal, as in the timeless, floating system of elements that represent no forms of certitude.