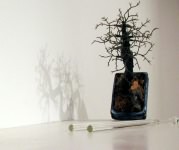 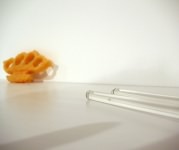 Momentary coincidence is called a conjunction. It might be accidental or intended, but in both cases the phrase denotes a phenomenon that displays a meaning surpassing itself.

János Fodor is an excellent observer. He comes and goes in the world, noticing minute details that are self-existent, but for him, these connect with other elements of reality seen at the same time and place. Simple facts lead to association, to seeking connections. Through this process, the selected thing becomes related to another selected thing, thus turning into a channel of meaning. Reality is full of minute details that can become meaningful if matched properly. One of the artists tasks might be to call attention to these relations, stating that our world is a surface filled with conjunctions waiting to be discovered.

The connecting link of Fodors oeuvre, encompassing several media, is analytic, exploratory behaviour. Be it drawing, photography, object or video, the works display gestures that disclose the hermetic dimensions of the cognition of reality.

If there are model conditions to be found in his works, his photographs definitely conform to them. Surprising conjunctions, mostly found in urban environment, call attention to the interpretable accidentality. Street objects, posters, stickers and signs radiate humour and the happiness of recognition.

His objects may well be interpreted as projections of seeking connections: his installations and sculptures constructed of found objects display art historic and common associations pertaining to material culture. In his compilations, twentieth century concept- and pop-mentality meets the practice of artistic awareness.

Fodors videos provide another aspect of his view of the world. Besides the short films expressing the aesthetic and philosophical beauty of accidental events, lately he has been recording sequences exploring the artistic aspects of movements and gestures. A pen leaving a trace on the wall, a geometric shape tapped by ballet shoes on the plaster or the sight of a piece of clothing lashing against the wall; the sight and sound of these convince the viewer in their simplicity of the value and richness of the tiniest details of reality.

A drawing is the most personal mark of the artist. In Fodors case, his lines consequently depict and align simply drawn figures, which narrate general emotions and relations through their shape and movements, with the help of the ever so acknowledged world of cartoon culture. The unity of this artistic activity arises exactly from its diverseness. The more sides of the same experience he sheds light on, the better he can render its beauty and lovability perceptible. Although Fodor is a man of words, he just cannot tell everything about his experiences. His means of communication beyond verbality is art, with he help of which he can direct focus on such things that most of us would fail to notice.