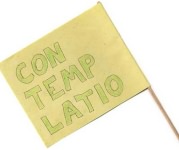 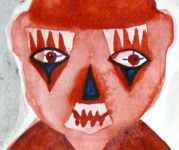 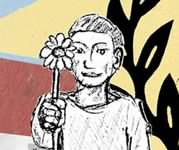 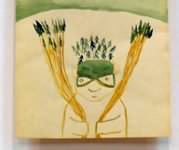 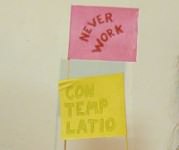 Panka and Kaszi are discussing art

P: There are people with whom you can converse in a way that ever new thoughts keep flitting around, never finding their way from one place to another, and some questions remain open  and I like it. This kind of communication  speech  doesnt work, for its slow on the one hand, and insufficient on the other. The simplest things can turn the other way round: I think of something and hey!, the next moment it is transformed if I keep on thinking
K: So a firm reality is also inexistent in your opinion?
P: Yes.

The wheel of time has turned. And I know where.

K: In the past years you have made a lot of drawings, small pictures. Some drawings can stand alone, but you still prefer building them into installations. Wouldnt the book format suit them better?
P: When installed, they dont just linearly follow one another, and thus the network of connections among them is more transparent. Of course, I would like to compile an album once, but presently I lack the funds for it.
K: You prefer using boards as part of the installations. Like demonstration placards, blackboards, drawing boards.
P: The board is a very simple, basic medium directing attention to the dissemination of a teaching, message or exclamation. I endeavour to involve the spectators, to make them view in a different way. In Bird meditation, for example, I used small drawing boards to allow the drawings to be taken in ones hands. For that matter, it didnt really work there
K: At the exhibition Private matter?, you built a floating roof out of drawing boards.
P: I had imagined a forest atmosphere, like a rain shelter under which one could retreat.

Yesterday I walked through infinity. Its totally out there!

K: The drawings on the roof show significant difference in style, and even the dating suggests that the series wasnt made exclusively for the installation.
P: In deed. I keep a drawn record of my experiences, observations, so Im able to use them as a diary subsequently. I mean these unbound sheets would make up a diary.
K: Why the need to keep a record of these observations and discoveries?
P: People have always created models that  through simplification  help fathom the complexity of the world and understand certain issues. Everything is in a constant and unstoppable change, and its normal that we attempt to grasp things and hang on to them for a breather.
K: It is not uncommon that disparate qualities are simultaneously present in one picture. Such as water colour alongside pencil toning.
P: This refers to the different levels I want to display concurrently. As if you could observe something through more than one filter at the same time. For most of the time we view things from only one aspect, and we tend to forget about the existence of the infinite number of other realities, of the fact that someone else may see the same thing differently.

beautiful is that makes everything up

K: Not once did I witness your pictures being regarded as childs drawings, which, I think, arises from inadvertence. Though undoubtedly there are several similarities  such as the clear and simple vision , these pictures are still composed in a completely different way. Not to mention the fact that most of the childs drawings we see unfortunately do not exhibit ample freedom, since children quickly fix the learned rules.
P: I enjoy the way a picture is being formed. It is not my goal in any of my work, including the drawings or the constructions, to come up with virtuosity of technique, which would leave the spectator flabbergasted with the feeling that they could never repeat that. It is considered depreciation to say about a work of art: I can do that too. However, this may be reversed: maybe the one who thinks this way will come closer to grabbing the pencil and starting drawing. Conversely, if this same person esteems the talent and the technical routine in a masterpiece, they will be less likely to attempt to try themselves in the same medium. Yet it might be important for drawing to become a natural part of peoples lives. It would entail slowing down a little and observing something  perhaps their own selves. Thus, in the long run, they would become more familiar with one another and nature, ant they would be able to care about important things.
Of course drawing is not the only such activity. One can go and play the drums for example, but drawing is the most easily accessible for anyone. Attention is its essence, and it needs practice. Also, its a natural  thus not repressive  way to tranquility. Many people only stop to glimpse around when something unexpected happens, slowing down their customary rhythm. Yet, if they spill a glass of water, they stop to clean it up alright, but cursing in the meantime. When they might as well enjoy the sight of the puddle, muse about what this H2O is anyway, and, rejoicing at the fugitive moment that had got them out of the rut, smile at the whole thing. We might as well give thanks to the thing that stopped us for a little while rather than curse.
Ill tell you something beautiful that happened at the playhouse. A little girl was given a glass of soft drink by her mom, which she accidentally spilled on the PVC floor. No damage was made, but the mother got angry and began shouting. The girl wasnt paying attention and kept whispering: sunny. The orange drink spilled on the floor had spread in the shape of the sun. The mother was unaware of whole thing.

its everywhere it likes to be

K: There are recurring motifs in your works. You draw your pictures more than once. Moreover, you have the cheek to redraw or repaint the pictures of others.
P: I dont think its very good when someone always struggles to come up with brand new ideas. It is not only possible to reuse things by making a sculpture out of rubbish, but at a mental level, too. Its unimportant for me to invent, good things are good things, regardless of who invents them, and they should be popularized and disseminated. Anyway, if you embed something in yours, it gets into a different position, with modified layers of meaning.

one shapes it as one sees it

K: The question frequently comes up: why and for whom is what you do important?
P: These are silly questions! Being an artist is not a privilege. I primarily do it for myself, but it changes by the time it is presented, its personal content decreases. I dont think it is appropriate for me to give an interpretation, because that would mostly be about me, and this doesnt need to concern the spectator. The best would be if everyone based the interpretation on their own mind. Similarly to how they interpret the Tarot cards or the Ji King poems, as a guidance for life. When drawing cards or reading symbols, the most important is how we interpret them. From then on, its a self-knowledge yoga. If I told what each work exactly means to me, I would narrow the scope of interpretation. If I say: here, this is a tea kettle, you will boil water for tea in it, when, if necessary, its also suitable for cooking potatoes, or, say, it has a nice sound and you could drum on it

K: Why all these pine trees, birds, mushrooms, deers and the rest?
P: Apparently this was the year of the deer, or I hadnt paid attention to deers before. One night I drew a picture with a deer, its ramous antlers almost completely enmeshing the paper, and ever since, I have been seeing and receiving deers. I prefer tranquility. It is easier to unite with the truly beautiful and divine experiences in nature than in the commotion of the city. I spend a lot of time rambling about hills and forests, though Ive always been a city dweller. Presently I live at the edge of the city, but this still isnt perfect. Sometimes I feel that the congestion is suffocating me. I would like to move to a small farm once. I yearn for mornings when I wake up and step barefoot out on the grass, among pebbles.
Years ago, I was walking home in the city, but my shoes were badly blistering my feet. I thought, it would be silly to keep suffering, so I took them off. Ah, much better!  I felt, and walked on. After a while, an old lady said to me: Miss, this is not very fashionable today! It took me some time to understand what she was talking about I try to observe nature here in the city, too. I try to see the birds, the clouds, and focus on them instead of the concrete. This is not always easy, I often despair. I try recording my observations in the drawings. Of course, Im not talking about depicting the sight, for if someone wants to see a pine tree, they shouldnt be looking for it in a picture, but go out into the woods, for it is there that one can really discover what a pine tree is like.
2B
A 38
ACB
ACB NA
ACB attachment
Art+Text Budapest
Art9
ArtMill
Artus
A.P.A.
Austrian Cultural Forum
B32 Gallery
Barcsay Hall
Bartók 1
Batthyány 24
Budapest Gallery
Byart Gallery
Deák Erika Gallery
Easttopics
FERi
Faur Zsofi Gallery
Ferenczy Museum
Fészek Gallery
Forrás Gallery
Fuga
Centralis
Glassyard Gallery
Godot Gallery
Greek Church
Hegyvidék Gallery
Horizont Galllery
House of Hungarian Photographers
Hungarian National Gallery
ISBN book+gallery
Inda
ICA-D
Jurányi Gallery
K.A.S. Gallery
Karinthy Salon
Kassak Museum
Kepes Institut
Kiscelli Museum
Kisterem
Knoll Gallery
Latarka
Látványtár
Lena & Roselli
Liget Gallery
Look
Ludwig Museum Budapest
MET Gallery
MODEM
MaMu Gallery
Magyar Muhely
Me-mo-art
Miskolci Gallery
MissionArt
Modern Image Gallery  Vass Collection
Molnár Ani Gallery
Mucsarnok/Kunsthalle
Neon
New Budapest Gallery
Óbudai Társaskör Gallery
Paksi Picture Hall
Parthenon-frieze Room
M21
Vigadó
Petõfi Museum of Literature
Platán Gallery
Capa Center
Rómer Flóris Art and Historical Museum
Rugógyár Gallery
Sesztina Gallery
Stúdió Gallery
Szt. Istvan Kiraly Mus.
Szikra
Telep
Three Seven Galllery
Trafó
Trapéz
Vajda Lajos St.
Várfok - Project Room
Várfok Gallery
Viltin
Vintage Gallery
Víziváros Gallery
exindex