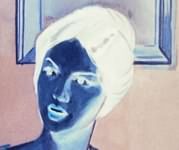 We all know what Paradise, the Garden of Eden is like, rendered manifest by the Bible for Western cultures. But what could a personal Paradise be like, one that relies on the free fancy of an individual? Biblical Paradise is a place whose nature and significance were evidently formed by the same historical, religious, cultural and social environment in which it was formulated. From this vantage point it seems logical to assume that the Paradises engendered by individual imagination are similarly dependant on the cultural, historical, and social environments of those who envision them. We might as well say: "Show me your Paradise and I'll tell you who you are!" A multitude of attainable or unattainable dreams, desires and utopias are projected into such a concept, and we thought it might be intriguing to see what these dreams and desires are like in present-day Hungary, 17 years after the political transition. The project was envisioned as a show, which, not insignificantly, would take place in Brazil, in Rio de Janeiro of all places. In a city of mirage-like exotic sheen, functioning as a kind of mundane Paradise in the fancy of European, or in our case, Hungarian people. This, of course, may provoke a smile from those who happen to be aware of the reality, the problems and struggles of today's society in Rio and Brazil. Yet we all know that the concept of Paradise has little to do with the actual geographical place into which it is conceived or projected. In fact, it has a lot more to do with the place from which the projection is effected. (Once a Finnish tourist happened to say in Budapest: "Well, life here in the South is really different," a comment that left us -- who imagine ourselves as anything but a Southern country and always fantasize about Italy, Spain or Greece - completely stupefied. In other words, apparently everything is indeed relative.)

At this point the idea of working with photography (slide), video or film, that is media related (literally or metaphorically) to the act of projection, offers itself naturally. Consequently, our call for participants in such a show was meant for Hungarian artists working with these media who were ready to render visually their individual, current imaginary Paradises. The nine works selected from more than forty submissions offer a wide and hopefully representative range of answers and modes of expression.

Ágnes Eperjesi chose filmstrip as the medium for her series "Replay of young Á. E.'s tribulations," a genre that is a collective childhood experience for most of us who grew up in the 60's and70's in Hungary. The filmstrip tales were projected on the wall by a characteristically designed small projector in which the roll was advanced manually (the projector at the exhibition is an original piece). Each frame of the tale was captioned with a narrative that was generally read out by the parents. This exceptional object at once assimilates individual and collective experience, evoking childhood, a Paradise no longer attainable in another way. The projected imagery was collected by Eperjesi from various existing filmstrip tales, which, complemented by her authentic teenage diary entries, help narrate her individual story. She reverses the positive images on the transparency film into negative through exposure, and colours them in the process with vivid colours, making them like fairy tales, though with an ironic touch.

Anna Fabrícius's "Non-lieu de mémoire" is a photographic series that recalls past personal and family memories and anecdotes connected to actual times and places. This recollection is realized by a handwritten captioning of the pictures, using the power of textual remembrance to breathe life and intimacy into the original locations that by now have become irreversibly altered and impersonal.

János Fodor's "Para" is a series of photographs taken in various locations, recording intentions of "environmental melioration" inasmuch as they depict surrogate paradises that are embedded in an irreparably urban and mundane environment and are therefore grotesque.

In Gábor Kerekes' video and sound installation "Urban Meditation", the video image is based on a circular collage depicting an imaginary city. With the help of visual and sound-effects, the work is meant to induce a state of relaxation. Ultimately it is about urban life and its atmosphere.

Tamás Komoróczky's video "To the Heaven Street 7 (There Is Milk Today)" is an ironic and puzzling piece, featuring a chamber orchestra dressed entirely in white in an unidentifiable, white (paradisiacal?) environment. Its members mime playing to some playback music of Indian atmosphere, with the occasional delay. They might be a group of Krishna followers just as well as a bunch of lunatics or fragments of a dream.

Endre Koronczi's video "Extreme Sleeping" is the realization of an experiment that is meant to bring about the paradisiacal state of undisturbed calm, inner peace and harmony in various places, in order to allow the artist to fall asleep in front of the camera. "Is it possible to induce such a state in a public space?" asks the artist. "How can a location turn into Paradise? What kind of inner processes need to take place in order for any arbitrary environment to turn into Paradise?" Koronczi seeks answers for these questions at 16 different locations. András Ravasz's video "Flow" projects his imaginary Paradise into a grass field rippling in the wind like the sea.

Finally Beatrix Szörényi's work, combining video and photography, targets the palm tree as a motif and a cliché. "The ideas and clichés related to our image of Paradise surprisingly resemble the desires related to the palm motif. The palm tree  at least for us Europeans  is the manifestation of another world, a more instinctive but perhaps more humane life, and a lifestyle that denounces civilization," writes Szörényi. The photographs depict palm trees found on facades, shop windows and shop signs, while the video tracks the transportation of a standing palm tree from a suburb of Budapest through downtown. The absurd-ironic work gains a new layer of signification by the replacement of the motif into its original, organic environment at the exhibition space in Rio. Hopefully, the rest of the works are capable of generating a similarly vivid dialogue between their location of origin and the location of the exhibition space and its audience.