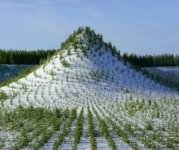 The Art of the Third Millennium  Creating a New World View presents the highlights of an artist's oeuvre who was among the firsts to include the ecological perspective in the circle of interpretation available for contemporary art, who created the notion of eco-logic, and who established, through public actions and environmentally conscious interventions, the form of environmental art, art realized in a natural environment, in the land.

Agnes Denes has created an oeuvre whose hallmark is the synthesis of the knowledge that is accumulated in the diverse fields of science and the free and critical spirit that distinguishes art. One of the first initiators of conceptual art, she studied natural and social sciences, philosophy, linguistics, psychology, the history of art, poetry and music, and she distilled this knowledge in unique works of art. Agnes Denes was among the first contemporary artists to examine the relationship of art and science, and her activity as a theoretician, academic and educator compares in importance with her art. It has been, ever since the 1960s, her artistic conviction that science, the treasury of centuries of universal human knowledge and experience, is, from the end of the 20th century on, mutually dependent upon art, the creation of visionary individuals, and that it is only through their cooperation and sharing of ideas that those new, globally relevant suggestions for change may emerge which can avert the ecological catastrophe that threatens mankind and can guarantee the conditions for global survival.

Agnes Denes's works deal with ecological, cultural and social subjects, often on a monumental scale. Perhaps her best-known work is Wheatfield  A Confrontation: in 1982, she sowed a two-acre area with wheat, on a landfill in downtown Manhattan, a few blocks from Wall Street and the World Trade Center, and tended to it for months, before harvesting hundreds of kilograms of grain. With this, she emphasized global human values, and called the attention to mistaken social and economic priorities. She finished Tree Mountain  A Living Time Capsule in 1996: involving massive landscaping, this reclamation project allowed 11.000 thousand people to plant as many pine trees in a former gravel pit in Finland, granting the former inheritable custodianship of the latter, and thus ensuring that the work serve, for at least four centuries, as a valuable heritage for future generations.