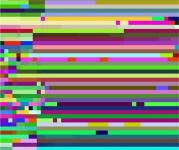 The computer images from the cycle Errors where inspired by the errors in digital photographs. The errors generated by computer have geometric shapes with sharp edges. As their basic unit is pixel / square, artist uses the square format as basic.

She also works with the RGB colours (red, green, blue). During her work on these quadratic systems she uses various basic operations: overlaying, rotation, decolouration, shifting, inversion, erasing, copying, duplication, combination. The quadratic systems are optical defects created by the intervention into an order. The horizontal and the less dominant vertical create the basic compositional system that always includes the same number of the horizontals (44) in square section plan.

In the colourful version of the Errors cycle the horizontals are filled with squares; their divergence in colour is often minimal as in the case of photography. The intersections of squares create the vertical lines. The artist later destroys these closed squares taking off the colour information as well the components.