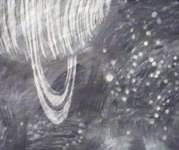 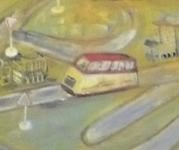 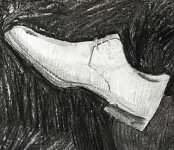 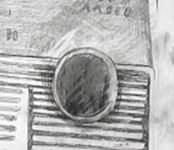 The picture in the advertisment is made of an image of a product before the costumer purchases it. Usually it suggests how this product will influence the life of the owner. In many cases people can have the opportunity to foresee themselves in a situation with the object. The situation - how the person and the product relate to each other - is a situation, which is desirable, one can ad the product to his identity. 'I am or I will be the same as that person in the ad!' The only difference is that I do not have the object yet.

After the act of buying the owner immediately belongs to that certain set of people. The identity is created or strengthened. A set of objects is creating the identity. Furthermore the picture of the ad works in two ways. Before one is an owner of a commodity, it works as a fetish creator and later when one gets hold of the object it is an identity maker. The pressure of switching identity from time to time results that we have to get rid of many objects. '

I cant identify myself with a product of the past, 'cause I'am not from the past! I am the woman/man of the present!' These objects (if they survive at all) are at the disposal of the very poor or at the maverick. As times are changing and the same style comes back, the 'oncefashionable and latter tacky object' becomes in, a 'vintage' or prototype for recreation. The 'object then' identify different then the 'object now'. The 'picture now' may use elements of the 'picture then', which means it can refer to the good ol' time (retro) of the product. The owner becomes time traveller as well and the object becomes partly a time capsule.