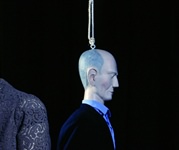 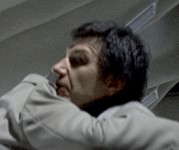 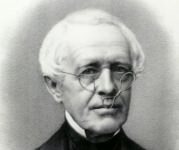 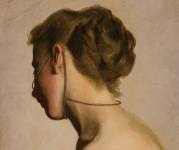 The theatre of emotions - this was how a critic described the art of Markus Schinwald. He is a contemporary artist of a unique character, whose interests include the reinterpretation of myths and human relations. How do temptation and desire emerge and intensify in a staged situation?

Schinwalds aesthetic is essentially theatrical, and becomes manifest in installations, performances and dance. Also, he has complex visions about how the works are to be presented, and he is often responsible for the environment of the exhibits and the design of the display.

In essence, his Budapest show focuses on the role of the body as defined by its cultural relations, analysing such components as fashion, dressing and gestures. Beside historical paintings revamped with unnameable accessories and pastiches of Biedermeier engravings, the display also features videos/films, footwear that has suffered strange distortions, shoes and accessories unsuitable for wearing but emphasizing a certain function, and narrative assemblages that rely heavily on the historical development of the image and consciousness of the body.

Beside the human anatomy, Schinwald populates his stories with animals, hybrids and marionettes, to animate and represent the communicative function of the body. His videos, objects, pictures and paintings point towards historical myths, psychoanalysis and various theories of culture.