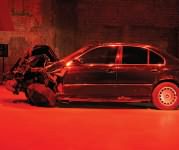 Sound installation, apostrophizing it, so to speak. The six-channel sound installation deals with stories of car crashes based on interviews with the victims, the texts of which are performed as a musical piece by three singers.

Passive Interview in the present case refers to a form of text in which the story develops in the interviewers yes-no questions, with the answers consequently reduced to yes and no.

Two identical sculptures have been made of the vehicle crumpled by the collision, 1:4 scale models of the original. The replication and duplication of the shape - a unique, singular shape - of the wrecked car, together with the yes-no question form of the interviews with fortunate and uninjured drivers who survived the accidents  highlighting their series of errors, questions the very existence of chance, or more precisely, assuming that chance is determined, suggests the possibility of predestination.

In the present case, crash as slow destruction is the equivalent of the extreme prolongation of the catastrophic moment via memory, which thus torn out of time turns into its own repeatable memento.