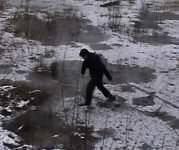 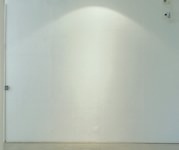 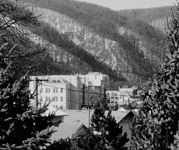 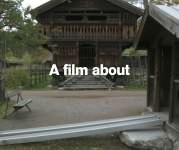 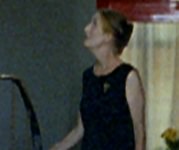 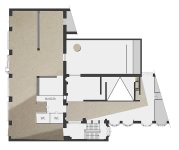 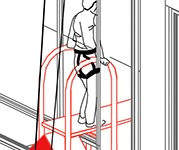 The starting point for the Related Spaces exhibition was provided by the building of Ernst Museum, its specific interior and its position in the surrounding urban environment. How do we perceive architectural spaces, and in particular, what kind of associations do we have with exhibition spaces and gallery interiors? How film and architecture are related, and how the experience of architecture is captured and represented in different media of contemporary art?

Bringing together participants from various fields of visual arts, Related Spaces focuses on the relation between space, history, vision and architecture and on the phenomenology and analytics of the perception of architectural space. The exhibition considers the parallels between certain contemporary art practices (like installation art, performance, photography and time-based media) and architecture as object, medium, experience and environment. The title, Related Spaces is a reference to the interrelated discursive fields surrounding architectural issues and to presentations and representations of architecture through various media.

The museums location and spatial structure are a source of inspiration for artistic practices that explore spatial perception, or adopt a view of architecture as location and fictive space, or real space and a visual image of space. Perception during motion, the act of walking, and processuality are emphatic features of the exhibition, as are its performative, narrative and scenic aspects. Based on the succession of spatial/image sequences emerging during the movement of the viewer, the exhibition refers to the interrelations of architecture and film. The participants in Related Spaces are artists, their practice is related to architecture, theories of space and architecture, and also to design and film making.

One of the most spectacular projects of the exhibition, a Climbing the Ernst - High on Art by the Space Detournement Working Group reflects on questions of the location/presence of the museum in public space, and on the relationship of the art institution and its visitors. The artists propose an alternative to the traditional entrance to the museum: climbing up the climbing wall designed by the artists, entering through the window, passers-by or visitors can access the exhibition space free of charge.

Walk in (untitled), a photo installation by Gabriella Csoszó is based on walking and exploration. In Csoszós spatial-essay, the photos show spaces inside the museum when they are vacant, that is, they are in a state in which visitors practically never see them. At the same time, due to the changing focus of the photographs, their dramaturgy of lights, minute events that refer to the use of space also take on a scenic character. This is followed by a reconstruction of the lost original ground plan of the Ernst Museum by Ferenc Dávid. The reconstructed ground plan shows the original spatial structure of the museum that the succession of rooms provides with a kind of narrative character, a particular kind of spatial dramaturgy, which reaches its climax in the room on the street side of the building.

Covering the floor with gray cardboard paper along the viewers path, Adrien Tirtiauxs installation Take this Waltz connects the spaces inside the museum and also generates a narrative based on successive sequences that presents topographic events as well as references to the buildings layers of history. The visitor unconsciously becomes part of the work's narrative that blends different experiences of the space, unconventional viewpoints, fictions and historic references.

The four films presented in the exhibition share several features: they explore the role of history and memory in relationship to architecture and presentation, they take the form of performance and/or are directed, displaying a relationship between the montage technique and architectural space.

The film by Mona Vatamanu and Florin Tudor, entitled Vacaresti (2006), was shot on the site of an orthodox monastery built in Bucharest in the 18th century and demolished by the dictator Nicolae Ceausescu. A symbolic restoration of the monastery, replacing collective memory, the effort to interpret, understand and face the recent socialist past, with an individual/artistic act.

The plot of Usula Mayers Interiors (2006) takes place in London, in the home of Hungarian-born architect Erno Goldfinger and his artist wife, Ursula. This densely composed film, rich in associations, makes tangible the question of the legacy of modernism, raising it in a homely setting, permeated with the love of art. Female presence is manifest on several levels (movement, gaze, symbols), overwriting the traditional forms of gender representation in relation to home and space.

Andreas Fogarasi made his video in the Norsk Folkemuseum, one of the worlds first outdoor museums, which was established at the end of the 19th century. Folkemuseum (2010) raises the question of the revaluation of historical/cultural spaces, while also demonstrating the contradictions in the mechanism of reconstruction.

Josef Dabernigs Rosa coeli (2003), is based on the intended differences between the planes of image and text, on the irritation caused by the montage based on sensory perception and rational principles. The montage inserts periodic interruptions in the flow of images - for a few seconds, the elements of architectural space become still images, frozen in space and time, emphasizing the films presence in space.

Audio-guides placed in exhibition space recount brief stories about people who were or are, in one way or another, related to the building. A historian of architecture, former director, warden/guard, media researcher, and an artist discuss from their own individual perspective the museums use of space, the visibility of the building/institution, its history, and its embeddedness in the city and local culture.