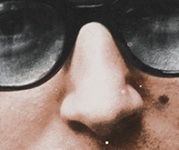 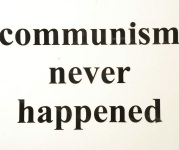 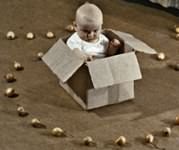 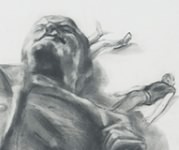 Following on the exhibition, New Acquisitions - Rarely Seen Works (2009), Kind of Change offers a second occasion for the museum to display recently acquired works of art. This overview exhibition can be considered a complete whole together with the rearranged permanent exhibition, Unmistakable Sentences (2010), where many of the newly acquired works have been on view.

One of the reference points of the present exhibition is the statement of Ciprian Muresan, a young artist from Romania, Communism never happened. This inscription is made of cut-outs from vinyl propaganda audio discs produced during the Ceausescu-era, thus the text and its physical medium together compose a condensed ambiguity that characterizes the historical and social consciousness, and memory in the region. The majority of the works of art that have been acquired by the museum during the last couple of years are embedded in the texture of the recent past of East-Central Europe and that of its ever-changing present, where questions of artistic forms and existence, and of historically determined artistic products have been constantly and painfully raised.

Self-portraits by András Baranyay, his series of portraits of his artist friend, János Major, the complex Pseudo-system by Gyula Pauer, demonstrations by Endre Tót in the streets of Geneva, or the action by Judit Kele who as a "work of art" put herself onto auction in Paris, the art of Dóra Maurer, or Ilona Keserü are all manifestations of the criticism of the socialist regime, as well as independent artistic and political views expressed in the neo-avantgarde of the 1970s in a latent or explicit way. We could also mention here the series of photograps and its digitalized version by Polish artist duo KwieKulik, as well as Tamás Szentjóbys film, Centaur, which was made and prohibited in 1975, and restored in 2009, with the contribution of ACAX, under the auspicies of Ludwig Museum.

The other point of referece of the exhibition is composed of fresh works by a generation of artists who were socialized after the political transition. These works, produced after the turn of the millennium, reflect a society where the heritage of the East-Central European past and the phenomena of global capitalism are simultaneously present amidst constant change. Artists from Romania - Ciprian Muresan, Mona Vatamanu and Florin Tudor - attempt to work through the history that permeates private life. In her video, Ilona Németh living in Dunaszerdahely, calls attention to the endangered private sphere. British designer, Matthias Megyeri produces "humanized" pieces for safeguarding industry. Czech Katerina Sedá involves the inhabitants of Tükörhegy, a housing project in Törökbálint, with her "social games", thus investigating the new ways of life and the visual-built environment of the sleeping districts, while Tehnica Schweiz, the artist duo of Gergely László and Péter Rákos, investigates the special hsitorical consciousness manifested in the activity of the community of artillerymen keeping guard over the legacy of traditions.