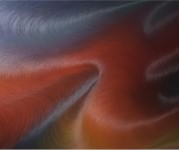 Bernát is an important figure of the Hungarian New Painting. He started in the early 1980s, when his darkly toned paintings were built from only a few elements, which in the 1990s turned into pulsating abstract surfaces.

His ruling motif is the twisted, whirling form, which fills his paintings with strong pulsation and dynamism. Bernát paints his seemingly homogeneous surfaces long into the darkness of nights. To add a soft shine to his surfaces, Bernát mixes aluminum dust in the paint, by which as the light hits these surfaces, different forms evolve.

Bernáts latest, immediately recognizable works grew in size and became twice, three times bigger. We immediately recognize his twisted shapes and currents as they enter the limitless spaces, but now the delicate undulation on his surfaces becomes more of a dynamic fervor.