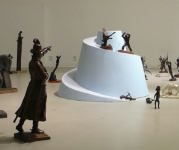 The newest project of Little Warsaw is an outcome of a process of an artistic research, which explored and examined the statuette database of hungarian public-, and private-collections.

The primary focus of the research was to explore the representation of aggression on statuettes and figurines  on such works, which depict military acts, patterns of agression in a deep analytical, or in a highly sensual way. The most interesting questions were raised though by the conceptual method which combined and formed series out of these autonomous semi-historical works of art.

The appearance of an inner landscape in the gallery  an installation of a fictive battle  gives place for the construction of dialogical situations between the autonomous pieces, which dialogues excavate secondary meanings out of the works, which start to speak about hidden motifs of a collective unconcious.