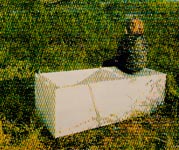 The painterly look of Bartek Materka is directed at the everyday visual adventures, but he especially concentrates on the deformations which the image of reality undergoes in our consciousness. Materka's works, which are usually created on the basis of photographs, are an analysis of the optical apparatus and the influences exerted on it by modern optic technologies and the methods of generating images (digital picture, television, microscopes, ASCII code).