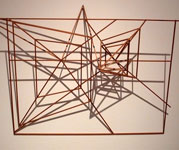 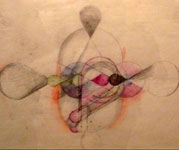 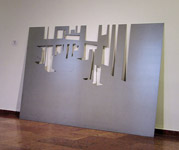 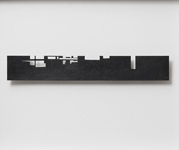 Working in a realm that is defined by the overlapping fields of painting, sculpture and architecture, János Megyik (1938, Szolnok) has built an ouvre that concentrates on modelling the structure of the panel painting. In his experiments the artist proposes a spatiality that is also a distinctive mark of architecture and sculpture.

This ouvre exhibition seeks to reveal how in his world the panel painting comes to life as a spatial model and a three-dimensional object. This impressive display, which selects from Megyiks output from the early 1960s to the present, features drawings, larch stick constructs, photograms, the steel plates of the latest period, as well as the artists architectural activity, in an attempt to capture the essence of the ouvre.

János Megyik first exhibited drawings and paintings that tried to interpret the geometric structure of the picture in 1965 Hamburg (Altona). The works of the first half of that decade analyse a model of human vision, the Renaissance perspective, and respond to the crisis of the picture by trying to redefine it through the means of projective geometry.

In the works he began to make in the early seventies, Megyik interprets the traditional theses of perspective within the system of projective geometry. He started to model the space of the picture in two and three dimensions, using wooden sticks, and later even timber.

From the end of the seventies on, he often employed the floor plans of medieval structures, as that of the Basilica of Santa Maria Novella of Florence; the work (19811982) that relies on this floor plan creates an ambivalence in which the architectural drawing can function as a picture, while the three-dimensional, model­like construct built on top of it may be considered architecture. These passages have remained a chief concern for the artist ever since.

When he attempted to realize the principle of projective geometry in model­like objects in the 1970s and 1980s, Megyik chose to allow the same level of significance to the projected image, the lines of projection and the plane. He made photograms of his three-dimensional objects, or else made his photograms the starting points of three-dimensional stick constructs.

In recent years, Megyik has compressed the three-dimensional picture models into two-dimensional works, planes. The upper edge of such a plane functions, on the one hand, like the horizon of a panel painting, and works, on the other, like an axis, under which the work bears projected and rotated forms, or their absence. Made from different metals with laser or water­jet cutting, these planes and frames are presented hovering inside boxes, or if large, leaning against the wall.

In the past decade, János Megyiks projective geometry­based concept of the picture entered the realm of architectural design. One example is the Gate of the Life Science Building and Library of the University of Debrecen, realized in 2005.

Megyiks contribution to architecture had its practical precedence in his work as a designer, which he pursued for a few years from the middle of the 1960s. In 1970, the Austrian AMBOSS company issued his Amboss 7000 cutlery set, now considered a milestone in design history.