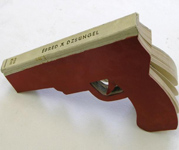 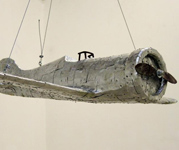 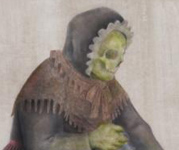 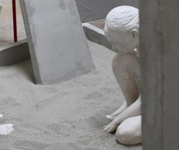 "The contemporary artist is like today's DJ," says Nicolas Bourriaud, French art critic, "'re-uses', mixes found effects, places them in new contexts, and gives new meaning, new accordance to the well-known topics that coexisted."1 The young sculptors exhibiting in INDA Gallery use this method, not to obey theories, but because they understand the most relevant ways of expression of our era. The artists react to the conflicts that affect the changing culture and society and express them by using the found and easily understandable objects in their works. Bourriaud calls these new works composed of familiar parts 'mental cases' or 'remakes'.

Ottó Szabó recalls an old, commonplace saying through his objects, 'words are weapons', and refers to reading that is missing from the life of so many young people, and offers a new role for the book: let us make weapons of them. The guns and pistols reassembled like jigsaw puzzles, express the complexity of knowledge in a figurative sense, but also reminded me of how the arts that lost their value in our daily life, especially the lack of literature is one of the causes of the ever increasing number of suicidal young people, who live without purpose in the conflict-vortex of society. Márton Emil Tóth shares with us his interesting observation on how the first 'toys' of little boys are the lightweight versions of military objects. Tóth substitutes the colourful helicopters of the mobiles of babies with fighter-bombers. The enlarged toys resemble the real things even in their metallic material, and the resizing changes our attitudes to them. The three, slowly circling fighters make up a roomful of installation, and they conjure up the terrifying atmosphere of a real air raid.

Duchamp's famous saying  that states that art is play, and every artist is a professional player, and that art is the common play of every man in every time  receives an extra meaning in this case, because every artist reacts to the toys, the playground, the children's worlds in a way, and use their elements in their works. The meaning of the playground is widened: the sculptor is closer to space than any other artist, places himself into it, defines, expands, overthrows, re-defines, embraces, re-builds, uses it. The first idea for the title of the exhibition was 'Weaponry', which would have expressed the general combativeness of our time. But only a few works met this criterion, which is why Playground seemed like a better idea, since the works emphasize the use of space, even in the case of a flat construction, like that of Pista Horror (István Máriás), who paints absurd scenes on faded sheets of paper, always using a symbol-set matching the given topic. His exhibited pictures feature a well-known figure of fairy tales, Little Red Riding Hood, but the horroristic, surrealistic side of the tale is emphasized. His forms and colours evoke the turn-of-the-century Biedermeier era, the bizarre juxtaposition of old curiosities  all of these completed with old Blondel frames sometimes. The artist's "...set of symbols is more memorable than his name and imagery, and at the same time removes Pista Horror from the proper mediocrity. His use of symbols is completely devoid of affectation, and ignores the serenity of children's books and folk romanticism, as well as the canonized sanctity of Christian iconography. Familiar content transferred from solemn, idealized context into trash." 2

The installation of Ágnes Hardi and Rita Kiss is also a roomful of sculptural group, inspired by black and white family photos of the two artists in their childhood, in similar situations: in a sand pit. The Mom, throw me the key! refers to more well-to-do children than those who wore their keys on their necks in the 1980s, yet it reminds me of them. The installation of a panel compound, similarly to the previous works, creates the art form of Bourriaud easily, and refers to it as a complete artwork: it is composed of the great source materials of art, considers everything a basic material, connects distant meanings, reacts to the given environment, gives a message, a meaning to everyday objects, uses and interprets the existing culture as an active, creating participant instead of a passive observer. Artists portray themselves as generators, who re-interprets objects and used forms by placing them in new contexts, and votes for re-building use as opposed to 'consumption'.