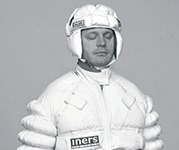 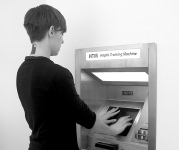 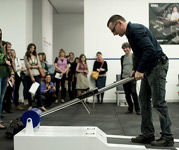 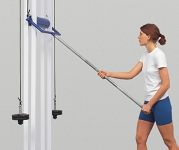 Antal Lakner is one of the Hungarian artists emerging in the 1990s, who have achieved international recognition. Working at the border between reality and fiction, he creates works of a subversive nature, integrating visual arts into quotidian reality, or querying the traditional approach to art objects and the monotonous rituals of audience behaviour by transforming the institutional environment.

His works, with both a critical attitude and a sense of humour, have been presented at numerous domestic and international solo and group exhibitions, including major international contemporary art events, such as the Hungarian Pavilion at the Venice Biennale, the Istanbul and Sao Paolo Biennials, the Fellbach Small Sculpture Triennial, and Manifesta 4, held in Frankfurt am Main.

The exhibition at the Ludwig Museum - Museum of Contemporary Art Budapest is the most comprehensive presentation of his work to date, comprising the artists major works housed in domestic and international public and private collections, as well as a number of new pieces. The exhibition space itself has been made to transform for the show: the conventional white cube of the museums gallery has become an interactive space, contradicting the fetishist approach to art objects and enabling visitors to become active participants in, rather than passive viewers of the exhibition: they are invited to experience the exhibited objects while operating, using and testing them.

One of the most versatile practitioners of post-conceptual art, Antal Lakner discards the notion of art as exclusively viable within a closed institutional environment. Rather than envisioning the creative process as the solitary work of an artist under inspiration and full of pathos, he approaches his work with the attitude of an engineer: adapting the precise planning process characteristic of industrial production or scientific research, he focuses on the conceptual content conveyed, rather than on the techniques utilised. By placing the two inscriptions, OVER HERE / OVER THERE, on the overhead beams of Budapests Elizabeth Bridge, he indexed the historical, geographical, social and cultural divide of the Hungarian capital on a mental map (Direction Signs, 1993).

He examined the dental surgery tourism of Austrians to Hungary, exhibiting their dental X-rays under the title, Personal Culture-Bridges (1994). He created revolutionary new forms of vegetal life, new species of plants living either in symbiosis with the human skin, or growing exclusively under the ground (Eurofarm, 2000).

For the Istanbul Biennial, he created the map of the first intercontinental subway system (Metro Istanbul, 1997). The map placed at Istanbuls main railway station proved to be a utopian project: confronted with the sign, passengers were mistaken, believing that travelling by subway was a real possibility (the subway system in Istanbul has been introduced since then), not least owing to the precise and authentic design and execution, which is characteristic of Lakners works from the outset.

Such an engineers approach became especially typical of the series of interactive constructions he created under the title INERS (from 1998), which only reveal their complex and surprising mode of action when the viewers start using them. As an idiosyncratic overlapping of work and leisure time activities, the objects resembling fitness machines allow visitors to practice the motions of manual labour (wall painting, wheelbarrow pushing, sawing, etc.) without creating a final product.

The INERS equipment Lakner created later are based on the new modes of behaviour and patterns of movement, generated by digital tools and the most recent internet systems, such as Handypress, a heavy mobile phone made of iron from 1999. Through these tools, Lakner explores the rituals of everyday life, such as using a cash machine (HTM, Haptic Training Machine, 2009), as well as the radical transformation of our living space and interpersonal contacts in the wake of web communication tools (First Life series, 2012). Visitors to the exhibition may test a double gravity suit (Passive Dress, 2005) and a micro-gravitation flotation cabin (Black Hole, 2005), enabling them to experience the radical change that a shift in the gravitational circumstances may cause in our relationship to space.

Lakners works seem to be real, everyday objects, which re-tune the space around us, along with our understanding of the nature of an art object, or our notions of reality and fiction. He created, for example, the fictitious army of NATO-member Iceland, devising its absurd-looking military equipment totally incapable of fighting, thus questioning the omnipotence of modern military engineering (HER  The Icelandic Army, from 1999). The Marine Unit called Plankton, for example, is an observation tower that can only be used for peaceful meditation and contemplation.

His extreme sports devices for use on escalators, in the subway, or in elevators (INERS  Training in Moving Urban Spaces, from 2006), are tools specially developed for the urban passengers of our modern civilisation, who are deprived of the ability of independent movement, enabling them to perform those leisure-time activities that have become separated from workaday actions, while travelling on public transport vehicles.

In his project, entitled Bundesberg, he designed a one-thousand-metre mountain for the city of Berlin, to be built at the site of Tempelhof Airport from blocks of compacted waste material collected from all over Germany over a period of several years. The planned process was modelled in an animated film and in the form of a raised-relief map.