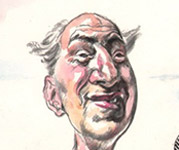 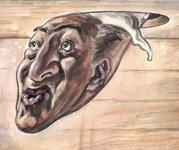 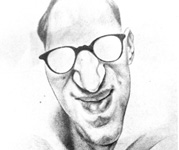 János Major was born in 1934 into a middle class jewish family, his father was died in 1943 in Russia, as a forced laborer in the Hungarian army. Together with his mother and sister, he survived the Holocaust hiding under a false identity. His artistic career took off to a promising start as he completed his studies in the late 1950's. He was considered by his peers and his mentors (among them the then celebrated Béla Kondor) as particularly talented and capable. But his more provocative works were often misunderstood, even by his supporters. When he attempted to exhibit them he was harassed by the authorities. In 1976 he was diagnosed with paranoid schizophrenia and hospitalized. After this he was too ill to work for 8 years. In the mid 1980's he resumed work and continued till the end of his life, despite the severity of his illness.

Major often stated that he disliked "isms" in art, the idea that artists need to reflect fashions based on pre-fabricated trends and ideologies. He consciously cultivated what may be called an existentialist attitude, seeing art as an activity that 'brackets" the audience and the end product; is instead concerned with the process of transformation in the artist and his perceptions through the creative activity. Working from the inside out, he attempts to transform the private and limited into something visible and limitless. The quintessential statement on this transformative action of art is Baudelaire's often quoted passage in his epilogue to Flowers of Evil (Fleurs du Mal) "Because in each thing I went to the heart of the matter, You gave me mud and I made gold out of it."

As his artistic vision matured, Major focused more and more on his own jewish identity. An exercise begun for the sake of mental hygiene, to clarify and understand his own 'spoiled identity' (to use Erwin Goffman's term), turned into a lifelong project. Two attitudes intersect and complement each other in his work: one is revolt and the other is self analysis. He exteriorizes his inner scars, his "stigma"; turning it upside down and throwing it back at the perpetrators. What is at stake in many of his works, is finding the effective counter discourse to anti-semitism. But Major was also keenly aware that he himself was part of the problem, that he needed to deconstruct his own self-understanding. This attitude, which combined revolt with merciless self analysis, characterized the work of post war jewish writers such as Allen Ginsberg, Saul Bellow and to some degree Philip Roth. These are among those that Major often cited as his ideological parallels. In 1960' Hungary the topic of jewish identity was off limits, attempting a radical unorthodox approach to it was highly unusual and daring. Major continued for the rest of his life to provoke, break taboos and to turn the tradition of self portraiture into a quest for 'self-clarification'.