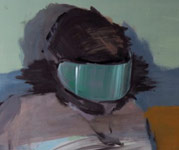 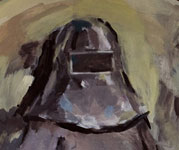 Today our hunger for images stretches to a level, where the longing for pictural contents is conditioned by our behavioral status: we both tend to produce and digest pictures, not to speak about the most actively performed mediating-sharing phenomenon. As the One, whose brain capacity allows the visual manifestation of a given thought grabs the whole process from the most tiresome part...

The painting versus photography dilemma nowadays seems to have arrived at a game over stage, as it has gradually loosened its edges over the hundreds of years, while the category-killing attitude called interdisciplinarity of postmodern theory gave a final kick. Although the long history of the two media in contra postition maintains some overtone.

When touching down on questions of representation, the oldtimer academy (running a Fight Club in the verbal field) argued for the pro effects of developing technology (we finally got to know the position of horses feet when galloping), but discovered the contras (overdemocratization of the media, artwork losing its aura) of the same specific gravity.

When the millenium closer to us has assisted the popularization of what-I-dont-photograph-does-not-exist lifestyle, now the web2 technology opens wide the window-sashes in front of our virtual eye, for which the world is no longer conveyed through canvas frames, but monitors ad primum. In these circumstances the issues on origin and originality above all came into discourse.

If today (with the détournement of the Foucault slogan) there is nothing that exist out of it , with other words we can forget about tabula rasa once the ON button was pressed, it is still refreshing to see liberating gestures that come by head. In the hope for the experience-wasting contemporary manner to re-open to more dimensions, there is something that plays in polyphonia (and cathode-ray-free).

In the works of Dániel Karsai, pictural information appears on the surface as result of wide gestural brushstrokes, the strong black outline of cartoon language and colour fields that serve the elaboration of an overall gore atmosphere, that contentwise focuses on the graphic portrayal of fear, tension and vulnerability of human body.

Even if the registered spectacle never gets too explicit, the labeling of the pictures enforce the presentiments: Trap, Hostage, Cannibal, Trophy, New Machine or New Skin - raise us beyond doubts.

While a horror movie has the option to channel in off-screen effects and play with the temporal development of the narrative, at Karsais all comes at once from a still image.

To the technical obstacle of seriality the mechanism of densification comes as an answer: the centrifugal motion of effect-hunter elements required as a minimum for story-line brings about the moment snatched from the continuum of time that defines all by one.

Karsai presents an intuitive and dynamic view of the world, that subverses effectively the consumed film and image cult plus the urban legendary of www into par excellence painting.