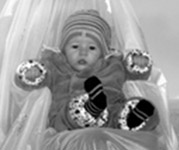 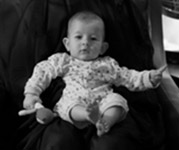 At the same time as the "single" lifestyle is gaining ground, post-Socialist countries, especially today's Hungary, are characterized by a revival of traditional and conservative female roles - reinforced by the official rhetoric of the state. The media not only comments on women's changed role in society, but also contributes to defining that role, thereby helping to sustain such socialization.

My photo series entitled Background is based on an extraordinary set of images: 19th century, Victorian-era photographs of infants and small children. In the period from the 1850s to the 1870s, exposure times were so long that it was impossible to photograph infants on their own because they would not have stayed still long enough. Their mothers had to keep them still in their laps. What makes these photographs interesting is the fact that the mothers were covered, and so, they more or less blend into the background, or rather, they themselves become the background in these studio photographs of children.

From today's perspective, the end results are strange and prompt wide-ranging associations. The mother is present and yet not present. She helps by holding the infant, but remains invisible, and cannot be present in the photograph of the child. In a way, this symbolizes the separation of the two lives and the beginning of a new life for both of them - in totally different ways. For me, these images represent the institutional system's attitude to women as mothers.

My child was born last July, turning my life, which had been busy with very intensive work right until the end of the pregnancy, around. The Background series explores the nature, place and social perception of my new role. The photos that served as the basis of the series touched me so much that I decided to take similar photos of my daughter, Alma. Hiding and peeping from behind a veil places the role of the mother in a very different context - a role everyday politics has extolled as heroic.

In contrast to the Victorian portraits, my photos were taken outside, in different regions and cities, since we travel a lot. As a result, the photographs also record our journeys, just like traditional postcards or Facebook posts do. This comments on the changed social status and role of photography, and also on the fact that nowadays people's private lives becomes public almost immediately.

My photographs are digital adaptations of the Victorian images but they are not manipulated technically. They are portraits of my child and also the metamorphoses of maternal identity.