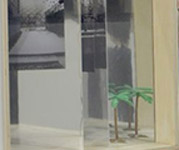 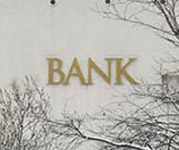 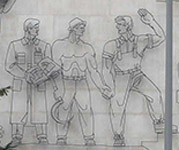 For the occasion of the fifth anniversary of Park Gallery Andreas Fogarasi has been invited. The artist sets up a kiosk inside the shopping centre, an irregular commercial unit, which doesnt sell anything, but serves as a surface for a photo exhibition.

This site-specific installation reflects to the place of the exhibition by drawing a schematic map about certain districts of Buda (I., II., XI., XII.) in which MOM Park shopping centre - formerly cultural institute of a factory - is located. On the kiosk, which could also function as an advertising pillar we can see photos of some public spaces of Buda representing the history of the local consumer culture.

These districts in Buda are exceptional parts which play a special role in the circulation of the city. They differ from the average living and working sectors of the middle class. These districts have been fields of several utopist architectural experiments during the last century. These initiatives were aiming to provide model for the inhabitants in terms of the right way of living, such as in the case of the Hungarian Bauhaus projects during the 1930s.

The modernist intentions considered the well being and cohabitation of the people based on equality and democracy as the main aim of architecture, whereas architectural ambient can function as benefactor influencing psychical a physical living conditions. The glory of these ideas is in contradiction with the real living situation of the inhabitants.

On the photographs of Fogarasi we can see buildings which are functionally important concerning commerce, consumption and transportation, which were built using the design of Bauhaus connected to leftist ideas. Although the buildings and public spaces on the photos can be related to various architectural epochs it is obvious that they concentrate to those inherited from the Kádár era whose legitimacy lay in the maintenance of the quasi welfare of the citizens.

From the 60s a special Eastern European hybrid of consumer society emerged in Hungary, which intended to suppress the rebellion attitude by the satisfaction of consumer desires. The photos on Fogarasis kiosk regarding these antagonisms warn about the manipulative forces working in the background of the visual.