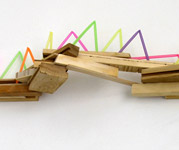 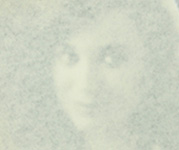 The joint exhibition of Tanja Koljonen, Beatrix Szörényi and György Szász focuses on the common territory of the three artists creative deliberations, namely the encounter between verbal and visual systems. These two worlds could not exist without each other, yet they also function as opposites  due to their essential differences neither can be defined by the other.

The works of each of the three artists speak to the viewer with a play of the wall surface. Tanja Koljonens photographs of her assemblages, Beatrix Szörényi's combinations of drawings and objects and György Szászs three dimensional architectural elements (fitted on the wall, but protruding into the space of the gallery) explore the relationship between the walls and the space they circumscribe.

It is not by accident that one finds in the works of the artist and art historian György Szász a deep knowledge and respect for the age-old principles of sculpture, even if this very respect manifests itself in violations of these principles.

With her conceptually based works Beatrix Szörényi examines the mutual influences of image and text, and thereby pries into the question of how meanings are transformed. In her works she investigates how compositions change when certain parts are covered  blocked out. A photograph of a building, for example, bears as positive forms the missing (negative) parts of another sheet.