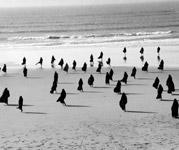 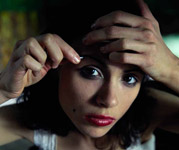 Iranian-born visual artist Shirin Neshat, who has lived in the United States since 1974, gained worldwide renown beginning with her photographic work and video installations, which reflect on the social structures of the Islamic world, and the situation of women in Iran. Among other themes, her work in various media investigates issues of gender, power, displacement, protest, identity and the space between the personal and the political.

The two works on view in Shirin Neshats first solo exhibition in Hungary demonstrate the range of her work in the medium of video. Her early black-and-white videos of the 1990sare represented by Rapture (1999), a two-channel video installation, and her later works in color by Zarin (2005), which is part of a five-piece series (Mahdokht, Zarin, Munis, Faezeh, Farokh Legha), each dedicated to a female character.

This project became the core of the artists prize-winning film Women without Men (2009), based on Shahrnush Parsipurs 1989 novel of the same title. Presenting Zarin from this series is no haphazard choice: the prostitute who lives on the periphery of society and then decides to flee is played by Orsi Tóth, a Hungarian actress known to quite a few cinema and theatre goers.

Both works display a similar sensitivity in their approach to social issues; however, while Rapture is marked by stylized images and a surrealist effect, Zarin is characterized by a more realistic lens. Neshat acknowledges that her works highlight the controversies of the social structures in Iran and the Islamic world, in particular the position of women.