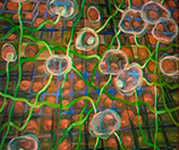 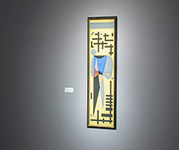 In the exhibition the history of the 20th Century Hungarian modern and avant-garde art is outlined through the dialogue of two Hungarian art collections. The concept lays on the vision that the 20th Century art-history wasnt formed by the opposing forces of Realism and Abstraction but by the dialectics or even the dialogue of these two different aesthetical attempts. Thus, the exhibition not merely places the parallel story of the two collections next to each other but explicitly focuses on initiating a dialogue between pure abstraction and traditional nature-depiction through the notion of sublime. The exhibition offers the visitors a delightful but also instructive chance to contemplate on the principles of composition, the relation of mathematics and nature and finally the questions of representation and unrepresentable.

Sublime, may it be the part of art historical notions since the late antiquity, only became really significant in the times of Enlightenment as an opposing idea to beauty. The issue of painterly depiction was primarily outlined in the genre of landscape. According to the brief and witty definition of Edward Burke (1757), sublime is something that evokes fearful joy in us. The English philosopher argues that the sight of sublime arouses such pleasure of which a determining substance is the delight that we may experience it only from a necessary, one could say aesthetical, distance, we only enjoy the sublime of nature, the sight of lava-flow, hurricane or stormy sea but we will not experience the detrimental effects of them. Immanuel Kant further analysed this sublime-notion and came to the conclusion that sublime is something that we cannot perceive through our senses but it is also the delight of the fact that after all, the mind can create some kind of a notion about infinite, immense and incomprehensible. From the beginning of the 20th Century, the artists started to be intensively occupied with this certain infinite and incomprehensible something, from the black square of Kazimir Malevics, through Barnett Newmans and Mark Rothkos colour-fields fading into the infinite, to the sublime emptiness of radical painting. The  representation of the unrepresentable did not only become the key of geometrical abstraction and abstract expressionism but also the driving force of the whole avant-garde art.

May our local, Hungarian history not reach back to Kant and the era of Enlightenment but from Kassák and Csontváry, through the masterpieces of European School and Hungarian neo-avant-garde, it leads us to different abstract, concrete and figurative tendencies of contemporary arts The most beautiful artworks of the Antal-Lusztig Collection are completed with pieces of the Vass Collection in the exhibition. László Vass founded his art collection in the 1970s, his close friendship with Jenõ Barcsay led his attention to the geometrical abstract, concrete and constructive art. A great part of the collection, that is considered to be one of the most significant European private collections, can be seen in the Modern Art Gallery of Veszprém.