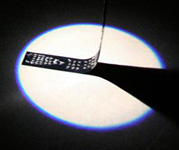 There will be no colours now. Just black. Glossy black. And peacocks, astronauts, earthquake and whirlwind. Things and events against the black background of nonentity. Tribute to the insignificants of this world who have been found worthy of encountering the absurd.

Lõrinc Borsos is a fictitious artist brought to life by artists János Borsos and Lilla Lõrinc in 2008. He lives in Székesfehérvár and works in Budapest. His site-specific installation in the spaces of ICA-D is made up entirely of new works created to study the dark matter he employs in his work. On this occasion he attempts to make the glossy black enamel paint talk along the lines of  and despite  its function and faculties, and then spread it out as a background, and editing board, in order to find correlations between past and current events of the passion of humanity.

The arbitrariness of starting the process is marked by minimal gestures and further induced by mechanical installations. Throughout the experiment, the effort of rational control is replaced by the practice of letting go. Beyond expression through painting reduced to ornamental quality, the elements of the exhibition are ordinary objects overdriven in their operation or deprived of their functions  and even dead creatures. Although mere trifles, together they suggest a coherent story.

God will make man see things, if it is only against the black background of nonentity*

As a result of disasters and tragedies, the individuals perspective is deflected beyond the twilight zone behind the visible world, onto the ultimate horizon. The realm of eternal absurdity, lurking behind the fabric of reality punctured by evanescence. Here, the laws of physics have no effect, this is the external darkness (light), in the reflection of which existence as we know it is a mere passing shadow. A particle experiment initiated by a flick, having expanded into chaos the size of a universe in order to collapse back into itself in the next moment.** Perhaps it will be parenthesized, but it also may arrive at last.

To look for the sake of looking: no different from being engrossed in aimlessness. Man is left on his own; and while everything begins to fade all around, his own self appears before him, threatened by disappearance, by nothingness. This is not so far from the revoking of creation. Even though the beginning was the hope of a new creation. ***

The artist seeks the peace of mind of those who dont stand a chance.