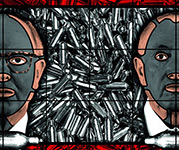 Gilbert & George have been creating art together for fifty years, mainly concentrating on the aspects of modern city existence. The art of Gilbert & George are always centered around the artists themselves who appear in them as Living Sculptures. With their elegant appearance, they communicate about timeless human phenomena through testing the boundaries of existing taboos and artistic conventions.

They do not separate their art from their lives; their provocative and shocking artworks are characterized by an intense communication with their audience. The exhibition  after appearing in several other museums  will be tailored specifically to the spaces of the Ludwig Museum, presenting visitors with a striking spectacle.

Over the decades, Gilbert & George have observed the evolution of their East London neighborhood and our modern world, dealing with the perpetual flux of urban life. In these pictures, the figures are acting in a way which recalls how Gilbert & George saw themselves as living sculptures, binding societal problematics and art together with a deadly serious way of describing a world of intense emotion, as well as its past, present and future.

These Scapegoating pictures, all from 2013, reveal a modern western world through Gilbert & Georges sociological environment by exploring the tensions generated by the coexistence and the interaction of its inhabitants. The pictures are populated by young people from different races and backgrounds, veil-clad Muslim women, and Gilbert & George themselves, masked in some pictures or covered in small bomb-like canisters of nitrous oxide in others, adopting different guises, sometimes appearing as shattered forms. They describe, as they have always done throughout their artistic practice, our modern urban world, by tackling subjects  death, hope, life, fear, sex, money, race and religion  in an engaging and direct way.

Gilbert, born in the Italian Dolomites in 1943, and George, born in Devon, England in 1942, both art students, met in 1967 at the St Martins School of Art in London (now Central Saint Martins College of Art and Design). At the end-of-year-show, called the Snow Show, Gilbert and George created their first artwork as a joint effort, far removed from the formalist criteria of contemporary arts education. In 1969, they created their first singing and living sculptures, making themselves both subjects and objects of their works in a perfect fusion of their art and their everyday life.