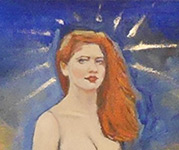 The name designates a life begun again and an oeuvre rethought following a profound crisis. The painter, previously known by the name Ágnes Szépfalvi, who had already had a significant career and won recognition, strove for a tabula rasa in her daily life and in her studio.

Her works are about the artistic possibilities with which she experimented in recent years during her search for the path most appropriate for her. She worked with metal and made conceptual lightboxes in which the ensemble of light and text comprised of simple sentences is decisive.

She looked for models in her immediate environment: as a kind of self-therapy, she drew and painted a formally varied series of works of a cat which was always nearby and, similarly, giving in to the provocative commonplace, she depicted Lake Balaton landscapes (reeds, hills, sailboats, sunsets, waves) in Földvár.

She set out in this direction in her painting as well: she used the eclectic, jumbled tools of bad painting, which from a painterly perspective are absurd, flawed, and corrupted, deliberately and without inhibition in bizarre group portraits and female and male nudes  which are not collector-friendly in the slightest.

Her exhibition is a striking and sincerely self-reflective gesture: it tells of what Agnes von Uray thinks of contemporary painting, the career of the artist, and the side of life which is more important than art.