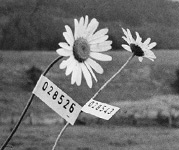 The focus of our exhibition is on the very early years of Perneczkys oeuvre: on the time right before his well known Concepts like Commentary (1971) series together with the Art Bubbles (1972) and the beginning of his engagement with Rubber Stamp and Mail Art. 197071 were crucial years with radical changes not only concerning the artists practice but his life as a whole. It was in late 1970 when Perneczky emigrated to Cologne in former West Germany, where he lives until today. By presenting two associated artworks of this period  5 Books (1970, Budapest) and Identification Program (1971, Cologne)  the exhibition examines Perneczkys early artistic development and its impact on his oeuvre.

Perneczkys 5 Books are conceptual artists books and were inspired by the catalog of Harald Szeemanns legendary exhibition Live in your Head  When Attitudes become Form at Kunsthalle Bern 1969. Perneczky witnessed the show in the same year on a study trip to Krefeld at the Museum Haus Lange. For Perneczky the exhibition catalog in the form of a simple file seemed to be a independent work of art by its own, it already contained all important ideas and concepts that lead to the realization of the works shown in the actual exhibition. According to Perneczky the term dematerialized art was already in the air. Soon after this encounter and back in Budapest it was not difficult for Perneczky to create artworks for which the modest form of a handmade booklet sufficed.

With his arrival in Cologne, Perneczky planned to create a sixth book as a supplement. But the resulting Identification Program broke with the original series and became entirely different in form and content. The series was based on 6 photographs with text distributed as offset brochures. It was all about capturing elemental phenomena (the shape of clouds, or the waves on the surface of the water), etc. represented by photography. The content of Identification Program was much more systematic and serious than the colorful, handmade 5 Books with their amusing irony and political connotation.