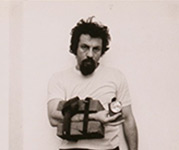 The main work of István B. Gellér was the Growing City, which he himself founded. In this series, to which he added continuously from 1978 until the end of his life, Gellér diligently discovered an ancient civilisation whose inhabitants considered not facts, but the emotions and meaning surrounding them, to be the basis, or starting point, for their existence and interests. The single room of items excavated from the now perhaps only semi-fictitious City over a period of 30 years, gives us an insight into a multidisciplinary project that can be regarded as a lifes work in every sense of the word.

In 1978 he moved away from his hitherto impersonal artistic approach, creating a mythology through the archaeological excavation of a non-existent ancient culture, the Growing City, and the exploration of its cultural history. In the course of his excavations, the artist, and his archaeologist alter-ego, brought into existence the literature, customs and cults of the Citys archaic society. He documented the results of the excavations in the form of installations, photographs and videos, and published the deciphered texts.