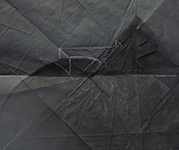 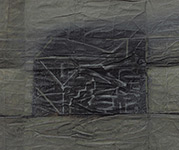 Károly Schmals art is philosophical painting on the border of abstract and figurative art which is deliberately made with only a few tools and out of inexpensive materials. Earlier, Schmal approached the painterly issues of the plane, space, sight and illusion and art and reality by turning his paper-based tempera paintings into objects, and he exhibited his works on several occasions in the Budapest Gallery. Order and the disintegration of order or the lack of order have always been among his artistic concerns.