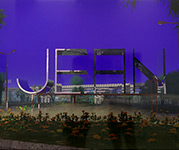 The exhibition casts new light on the works of Péter Szarka (1964) created in the 2000s using 3D modelling software. Highlighted by his participation at the Sao Paulo Biennial in 2004 and his solo exhibition at the Kunsthalle, Budapest in 2003, this phase in Szarka's oeuvre is already concluded, but his works are still as fresh today as two decades ago, when they were conceived. Moreover, the main elements of his artistic programme, namely the impersonality of artistic expression and the use of trash aesthetics have since come to shape the attitude of a younger generation of artists. "The things I am dealing with right now are in a no man's land." - Szarka stated in a 2002 interview. By today, the discourse of contemporary art has caught up with the trailblazing works of Szarka, which are still open to new reception and interpretation.

Péter Szarka became known as a founding member of the Újlak Group around the regime change in 1989, when he was making art that fused the genres of painting and installation. Szarka's identity as a painter has defined his entire career from the Újlak period up to the most recent times, when he prefers working with colourful plastics. Szarka defined his artistic programme in the 2000s as painting as well, even if in terms of technology or media he had distanced from the classical tools of painting, especially as the currently exhibited works were printed using photographic technique.

It is important to point out with regard to this exhibition that technology has never been the centre of Péter Szarka's aesthetic interest. Although these works may have been conceived from the fusion of the electronic ecstasy of the nineties, Szarka had never endeavoured to create visual prefigurations of a utopian future. The artworks of Szarka present a vision of the future which was already anachronistic 20 years ago. Szarka consciously played with the visual allusions of the 3D modelling software he used, which had given the impression of time capsules already in their own time, holding the image of an envisioned future. Confronting the past with an imaginary future has been one of the dominant queries of Szarka's art ever since.

The exhibition is constructed by the logic of an instinctive mini-retrospective, showcasing a number of works and series never before displayed, but without the claim of completeness. The gallery's foyer accommodates Szarka's earliest lambda prints of 3D renders, Fear of the Blue Planet 1.-2. (2001) and Thaw (2002). All three dystopian pieces show flashes of the evanescence of human civilisation through images of a ravaged cemetery and human skulls.

In the gallery space, pieces are displayed from such iconic series by Szarka as Statues of Rebels or Politics and Tourism. These are accompanied by pieces from the series Cold Sun Statue Park, which was represented at the Sao Paulo Biennial and other works, narrating an inextricably mysterious and absurd event in a powerful architectural framework. It is in relation to these works that the spectator can really perceive how the artist has increasingly objectified the human figure, to the point of displaying it as a metal statue. Metamorphosed into monuments, humans have also started to become a thing of the past in the Szarka universe.