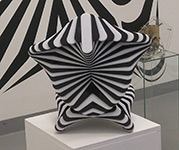 Péter Szalay presents his latest exhibition at the space of the acb NA. The choice of venue is related to the site-specific nature of the artist's new works, as in this case, Szalay deals with time and its alternative measurement, but the main points of reference of his works, which include kinetic art and op-art, two distinctive tendencies of the 1960s, also play an important role. In recent years, the exhibition programme of the acb NA has focused on the rediscovery and re-contextualisation of Hungarian avant-garde art, and Péter Szalay is the youngest artist exhibiting in this space.

Péter Szalay graduated in sculpture more than a decade ago at the Faculty of Arts of the University of Pécs. Since the onset of his career, he has been characterised by a predilection for experimentation with new technological solutions and new sculptural raw materials. Szalay's first important works - like Libero Arbitrio, 2008 - were mobile sculptures and object installations, as is the central piece of his current show.

Szalay's latest works were inspired, among other things, by phenomena on the border of mathematics and sculpture. At this exhibition, the artist presents a special clockwork on which the clock hand progresses along a pentagram-shaped plane curve constructed by extraordinary engineering logic. The static sculptures at the exhibition were generated by Péter Szalay by overlapping the clock hand's movement phases in space. In plane, on the other hand, the clock's movement phases eclipse one another, forming abstract images that were transposed by Szalay onto enamel-based pictures. A significant reference in relation to the pieces on the walls is the recent digestion and repositioning of the activity of the Bonyhád enamel Symposium and artist colony.

As a sculptor of Pécs, Szalay consciously paraphrases, among other things, the formal aesthetic of Victor Vasarely's mass-printed works. The reference to Vasarely is at once a reflection on the functionality of the acb NA exhibition space, in this case by evoking an artist who, despite being one of the most famous 20th century artists of Hungarian descent to date, has had controversial reception in the local art scene since the 1960s, despite the fact that in recent years, retrospective exhibitions of his work were accommodated by such institutions as the Pompidou Centre in Paris or the Städel Museum in Frankfurt.

In terms of repositioning Szalay's exhibited works within his own oeuvre, it is important to emphasise that this time, he took the abstraction of the functioning of clockworks as his point of departure, while his previous solo exhibition On the Surface in 2017 featured abstracted versions of kitsch figurines by using two procedures yielding formally similar results: crystallisation and 3D polygonal reduction. Although Szalay's works appear abstract, they depart from rather concrete objects, thus querying the fundamental character of abstract art.