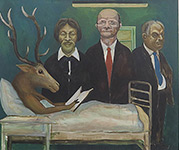 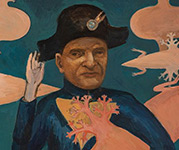 The leitmotif of the newest cycle of Gábor Roskó is a seemingly unreal, but still real being: the Olm. The pink branchia identifies the mysterious blind cave salamander, which grows outside of his head.

Roskó puts even more emphasis in his paintings on the branchy organ, what becomes an antler, a universal allegory of sensitivity and vulnerability. The quasi-narrative bound together by the olms features also an arcehtype of a tyrrant, a crying nude of King David and the figure of Spinoza fleeing through the mountains in a dreamlike scene.