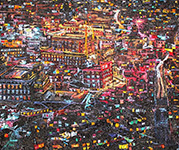 Levente Baranyai (1966, Budapest) has been dealing with the dialectical relationship between untouched landscapes and traces of human civilization for almost three decades. His paintings portray agricultural lands, cemeteries of decommissioned aircrafts, iconic sites of our capital, always from the aerial perspective of satellite images.

Over the past few years however, he began to focus on the decay of humanity and civilization, and the depiction of demonic traces of destruction. His latest paintings reveal the ruins of the colossal structures of former civilizations, which have become preys to wars and human greed.

In our present exhibiton, Baranyai paints a dystopian image of our contemporary lives, he captures ancient cities that were recently destroyed to dust by the homotirannus, a giant anthropomorphic monster embodying power and human arrogance.

This imaginary, fictional character was created by Baranyai, and it is rather similar to the man of today, who devastated and exploited wildlife throughout world history. To live in the shadow of this scary creature, of the homotirannus, means to be afraid of the unpredictable consequences of destruction, and decay.

The apocalyptic cityscapes and the fragments of surrounding landscapes still appear from a bird's eye view, and actually based on manipulated satellite images. The monumentality of Baranyai's theme is also indicated by the size of his canvases. The thick, multilayered oil paintings create not only spatial depth, but also a dramatic, shocking effect.

Baranyai works with a special painting technique, he creates his expressive works that emerge from the space, and reveals his illusory landscapes from fleck-systems and the construction of small elements on top of each other.