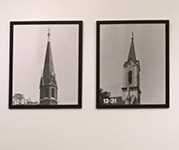 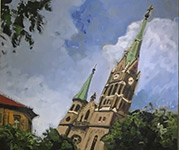 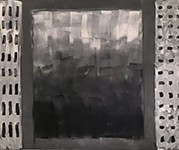 Csaba Nemes's exhibition entitled "Metamorphosis " is an overview of an oeuvre that has been in evolving for more than thirty years. The title suggests that although his art has taken shape in many different forms and subject matters in the last decade, overall an interest can be discovered that connects and interprets the works for the viewers as well.

The exhibition presents several eras, both those that preceded his commitment to painting and those that interrupted his work. The character of his photo-based media works is rooted in the world of post-regime Hungary, when Hungarians witnessed an era of transformation in political life, society and economy alike. The existential dilemmas of this era also returned in later paintings providing themes to his various series.

The core of the exhibition is defined by two dominant concepts dating back to the 90s. One is the search for identity, which has been a major issue for everyone, artists and non-artists alike, and how an individual finds pivotal points in life he or she can attach his or her personality or career upon. For Nemes, this was based on the new world in which one can experience the freedom of information, travel and doing business in Hungary, which completely transformed one's world view.

The other concept that the exhibition revolves around is the "metamorphosis" everyone could experience in judging our living environment in recent decades. It has been found that Kádár's modernism of the sixties and seventies was criticised in the nineties as an out-dated history, but it was reinterpreted from the two 2010s as an expression of a lost utopia as a manifestation of an age when one could still believe in world peace and interplanetary travel.

These concepts and their multi-aspect interpretations define Csaba Nemes's painting - this is what the exhibition by M 21 presents. Forms of modernism, the legacy of the generation of the 1960s, the ordinary urban environment and abstract compositions detached from it are recurring elements in his painting which constantly confront the viewer with the contexts and parallels of the past and the present.