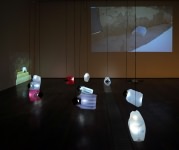 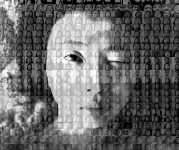 In the autumn of 2009, Modem held its second workshop for intermedia artists. In addition to the twenty artists coming to Debrecen, a number of others also joined in the work of InterModem on the internet. Through the work of the eleven artists participating in the virtual workroom initiative, all continents were represented in the project. This exhibition is the result of the projects that were commenced in the autumn.

Similarly to the workshop, the exhibition is built around a theme that was provided for the participants as a starting point. The artists undertook the challenge of addressing the fundamental questions formulated in the invitation to submit works related to the theme of Fake (pretence, counterfeit, disguise). The exhibition in Debrecen is a part of a project based on international cooperation. The project titled Alternative Routes came into existence through the cooperation of four festivals dealing with various areas of media arts, which are each held in cities other than the capitals of the respective countries.

The basic idea for the cooperation involved the formation of a network through the nodes of which the latest pieces of media arts can travel, by way of taking advantage of the already existing and continuously development system of relationships between partner festivals, while also paying attention to the unique character of each of these events.

The first section of the exhibition consists of works that were started during the workshop. The special technical tools made available for the work by the organisers (speed camera, heat camera etc.) served an inspiration, as did also the company of artists arriving from a variety of countries (Austria, Bulgaria, Czech Republic, Poland, Slovakia, Spain) and the thematic guidance provided by the curators.

The second section of the exhibition presents works by the participants of the virtual workroom related to the Intermodem Workshop, which also reflect on the theme of Fake. The essence of the idea of the virtual workroom was to also involve in the common work some artists at remote locations, who could not be physically present. In contrast with the initiative in 2007, this time only such artists could participate who live and work outside of Europe.