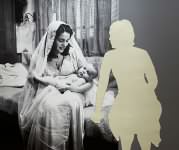 It is a quasi retrospective for several reasons: because it does not showcase pieces from every group of works Csáky has made during her career so far; not all the works belonging there are presented in each group included in the show; and the exhibition does not attempt to give an overview of the entire oeuvre. Nevertheless, it is still a retrospective show because it presents a selection of Csákys works from the past 20 years in a way that this narrow selection reveals how the various directions in her life-work are linked.

1. The sources: some 2,500 photo(negative)s Csáky inherited from her grandfather; her life; her studies.
2. The themes: various, yet, not an infinite variety. Idyll in the garden in her childhood, sexuality-pornography, relationships, toposes of art history  all transposed to a new arrangement, to compose the world of the work.
3. The techniques: photo, drawing, montage, carved wood, software manipulation, stitching, video, collage. All the media through which thoughts, concepts and ideas are shaped and embodied. Sometimes she merges opposites, at other times she creates distance between things that belong together.

Most works included in this exhibition explore the question of time and memory. Retrospection itself is a thematisation of this question, too. At the same time, presented together, these groups of works also reveal how Csákys oeuvre has evolved.

Already in her earliest work (2 light-boxes, 2 photo-drawings 1932/1993-95), the artist used her grandfathers photos, as she did in both Time leap series (2007 and 2008), preserving the idyllic world her grandparents had created. However, by combining the old images with drawing, by re-interpreting or re-contextualising them, these works do not develop them into a perfect idyll. Rather, in this way, the additional drawing, the re-interpretation becomes an expression of the artists reflected view of the images and of the reality beyond them  at least, in retrospect. Csáky steps out of this world, but at this stage, by leaving that world behind, instead of entering somewhere, she enters into nothingness. However, this nothingness is not necessarily the void of becoming nothing. It can also be the space of thinking, reflection, meditation and transformation.

The next group of Csákys works is represented by 3 chopping boards (1997), carved in the style of folk wood carvers, depiction acts of oral sex. And it is here that we can grasp that what is evident for the artist can be perplexing for us (namely, the combination of the styles and iconography of such distant areas of culture). And it is through this self-evidence of combination how these works make certain ideas accessible.

This is where sex reappears in Csákys work  a subject that continuously bears significance in her art. The line that separates sex and pornography is slim, transparent and fusible. Its everyday nature and simplicity makes the medium seem to be in contrast with the forbidden-secret themes of magazines. However, considering that the subject and the medium alike belong to the sphere of mass consumption, we realise that they match perfectly. Such images are objects of mass consumption, just as chopping-boards are. If you like, Csáky only made use of the power of perplexion inherent in the gender-gap (while chopping-boards are the kitchen tools of hard-working women, sexual images are consumed predominantly by men).

From here, we have to perform a leap to the Time leap series (2007; 2008), which explicitly embody and explore the themes of time, memory and identity, and they demonstrate how the past evolves into life in the present.

Most works are based on photography, and even where they are based on moving images, they are frozen, and thus become, like photographs, mechanically halted images cut out of the stream of time. And they also become the bearers of personal subjects. Marianne Csáky turns towards her own past, and using the prints of that past preserved in unchanging forms in technical images, she explores herself, her present  and ours. And then, she presents the outcome of these explorations in a mystical, spatial representation of time.

In these memory works, she explores her life, history and past, and the more meticulously she does so, the more the individual becomes unbound (at least, from its fixed quality), to re-create itself and the elusive time again and again, in the permanent stream of time. Csáky performed time leaps, and, partly through condensing time, these leaps create meanings. Therefore, her images present the creative force of memory and the work of time.

Although the last two groups of works in this exhibition focus on other subjects, they are related closely to the ones discussed above also through the similarity of the manner of image making involved. The differences in the modality of these works from the previous groups are highlighted and made even more striking by the differences in their technique, and all these factors together create the new meaning. The Bilocation series (2009) is still connected closely to the Time leaps. Through her Korean alter-ego drawn onto the large stills of old home videos, the artists here attempts to bridge temporal and spatial gaps.

Dream my dream (2010-11), was made using similar techniques to the ones in Bilocation, but this time, Csáky reverses her method: now, it is her who constructs the entire image. Instead of appropriating existing ones, now she took colour photos, and drew silhouettes after  we have every reason to assume  family photos.

In Dream my dream, Csáky continues her exploration of time, and the subject of distance also appears here. Although this implies cultural distance, through the collaging, it also eliminates that distance  to an extent that it is possible in an image.

Al lot more could and should be said about these works, such as how, made using various techniques, the images of the past and present, of dreams, distant and close, and places and figures presented with various techniques, interpret one another. And also about how Csáky uses montaging to hide certain things and emphasize others can be related to theories of the image. And finally, also about what these images narrate when they do, and who dreams and who is dreamt of in this ocean of tales.

"... art is a personal matter for me. I make art in order to think about things through it. [] Right now, my life has come to a stage where I have to re-consider a lot of things, including my relationship to the past," Marianne Csáky said in 2008. And as we witness in this exhibition in 2011, this is an on-going process of re-consideration.