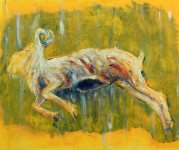 The accidental flow of Coffee-grounds is often used to predict future fortunes, but on Forgácss photographs its nothing but the graspable present, the grounds are confined within the walls of the cup, and their space is given and cant expand.

His videos are "Zen" diaries, imprints of his personal observations. The boundaries of Forgácss artistic possibilities seem to expand here, the horizon grows and shrinks as he wishes, just as the jumping frog moves the exact way its director wants it - one simple event becomes a complex, perpetual sentence on his videos.

The biggest surprise of the exhibition is certainly Forgácss painting series. Even that he studied to be a sculptor at the Fine Art Academy, he prepared himself to be a painter, yet in the 1970s Forgács put the paintbrush down to make films. After 15 years he decided to paint again.

The primary inspiration of his paintings is the moving images of this exhibit. Everything connects to everything else here, everything has many layers to interpret - even beauty cant be intact from the moods of our preset times.