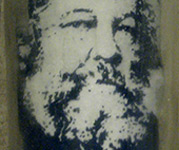 The exhibition at acb Gallery presents a selection of Gábor Altorjays subversive works from the period after 1967, never before displayed in Hungary. In addition to being readily interpretable by todays tendencies of contemporary art criticism, the exhibitions explicit goal is to reinstate the works and the oeuvre into the continuity of art historical canons.

Altorjays activity in Germany was an organic consequence of the Hungarian practice of joining the fluxus networks. This continuity is indicated by the fact that certain works (e.g. Chess-Compote, Uncomfortable) were recycled in the new environment. Breaking free of the Hungarian isolation, coupled with the inspiration of the vibrant, active contemporaneous scene, entailed the formation of a new language, which incorporated the devices of political actions into his works in addition to technical devices and political symbols. An example of this tendency is his environment of the politische kunst (political art) from 1970, the Electroshock Automat, reconstructed specifically for this exhibition.

In Stuttgart and Cologne, Altorjay quickly adapted to the program of 1968, which blurred the boundaries between art and political action. His work entitled La Strada (comprised of object and photograph along with a film footage) testifies to this: it was created during a political protest, where the piece of lemon originally served to neutralize the tear gas used by the police. Or his small objects made for his first exhibition in Germany, such as Anti-apotheke Bakunin, which reflects on the early discourses of critical Marxism.