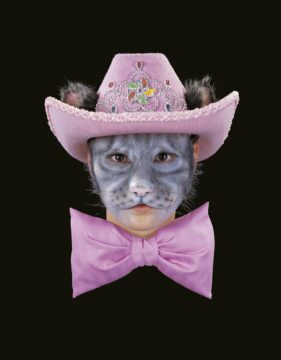 ’We’re gonna pick up the cables soon – do you mind if the kitty can’t come in for some minutes more?’
‘We do mind. He got bored in the kitchen. And that’s a shame that he was left out of the picture. Our only true reason for optimism is the cat. This little fluffy predator could not have been tamed to us through thousands and thousands of years with anything other than unwavering, claimless, and unconditional love; with absolute adoration of his beauty; with full respect for his freedom and independence. If we could do that, humanity can never be completely lost.’” /In Géza Ottlik, Prose/

If a single image were to illustrate the essence of the 21st-century billow of digital images undulating through the channels of the World Wide Web, it would certainly be a cat photo. Despite being disputed by dog lovers to this day, the quasi-official mascot of the Internet has become the mysterious, self-contained, plushy-soft kitty cat.

Beside the animal’s obvious beauty and sweetness, Felis catus owes its immeasurable popularity in contemporary visual culture to features such as its human facial expression, glamorous intelligence, relentless curiosity, unaffected humor, constant unpredictability, and aristocratic nature. The multiple layers of meaning related to the cat are constantly accruing since its domestication.

Taming the cat was legendarily long, and in the millennia that have passed since its beginning, the feline companion of man has become a complex animal symbol – it is a playful, candid, and childlike creature; the archetype of tranquility; it is the night itself, the animal of esoteric knowledge; the epitome of acumen; a symbol of femininity; an icon of lust. Considering all this, the cat photo genre seems to be predestined to popularity.

The MEOW! exhibition features a tiny segment of the world’s ever-expanding archive of kitten images. The collection of photos from nine contemporary Hungarian artists (photojournalists, photographers, artists) are accompanied by their short personal anecdotes about feline-human and human-human relations, aspects of image theory, sociological observations, superstitions, obsessions, eyes, and whiskers.